All Over The Globe 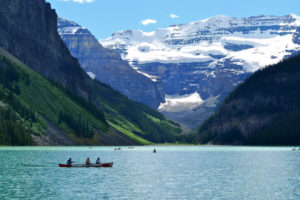 Thinking of going around the world? Here are some countries you should think about on your next travelling plan:

Your bucket list of countries you want to visit won’t be completed if you don’t visit the Taj Mahal. This beautiful place was made in the 17th century by the Mughal emperor, Shah Jahan. Located in Agra, India, this grand mausoleum took over 20 years to be created and is considered a world heritage site as one of the most beautiful pieces of architecture around the world. The Taj Mahal is a symbol of India and is created around Persian, Indian and Islamic influences.

Lake Louise is found in Banff National Park, Canada where the best hiking trails, ski resorts and lakes are found. However, nothing can beat Lake Louse as this is considered ‘The Diamond in the Wilderness.’ The lake is surrounded by waterfalls and glaciers so make sure you have a good camera with you as you also take advantage of this glorious location.

This beautiful but rugged location does not just offer beautiful sunsets but the natural formation of red rock is just as beautiful in almost every direction you look at it. There is plenty to do while at the park such as camping, hiking, water rafting at the Colorado River and even searching for rare wildlife.

The Great Pyramid of Giza

Ancient Egypt is one of the most interesting cultures most love learning about. And what proof could you better study ancient Egypt with than just by visiting the Great Pyramid of Giza? It is the oldest and most preserved of the seven Ancient Wonders of the World and a great symbol and Egyptian architecture. Just being in the presence of such a symbol is truly inspiring.